That’s it, you have most likely the penultimate chance to tell us that we will fail, we are vile plagiarists and other similar things that Russian and Irish love to say. I hope I’ll write a post mortem with a smart look and a fat belly about how cool we all are and how we made it. And, of course, there is a chance that I will be lyrical poem “We done screwed up.” I’ll sum up some things here and I’ll tell what we are working now, what we are doing again for God knows what time and when will it all be over. I was recently told – “wait a couple more months, nothing further depends on you.” Hooray, if it is so!

Remember how I wrote in the last diaries that we are all done with the music? It was a lie! Brazen and shameless, as I can. Demons forced us to start working on the Lo Pheng’s storyline in November, and we recorded a few additional tracks. Unfortunately, this time, they are really the last.

Since the last diary, we have been asked several times on Facebook and our Discord on our process for creating the music and how we prepare the task for Adam.

Full OST of the game is 24 tracks for 73 minutes and 19 seconds; and for every second of it I feel proud! Ah, golden piastres, it seems I had to sell a kidney to record all this music 🙂

Each track is tied to a particular scene or mood, which the player should experience. For each track, we define the type – environmental, combat or cinematics. Mostly this affects the rhythm and use of voice in the composition. Then we decide on the maximum duration of the track, the need for a magnifier and key emotions. Latest, key:

For the track “North winds are coming” the description was – joyless, oriental (a little), dangerous, presses on the listener, needs male voice. To each track we add a small text description (I’m not sure that Adam reads them though 🙂 ):

We are in Vodan, a city in an East Asian style. This is the beginning of the story line of Lo Pheng (eikonian, similar to the flawless from the series “Game of Thrones”), a warrior of the highest skill and bodyguard for the governor of the city.
In Vodan, everything is ready for the celebrations in honor of the vernal equinox. Friezes are cheerful guys and celebrate it with public executions. Hundreds of slaves were already brought to the city and a crowd of people is going to watch the torture. The Harvest is about to begin.
This is a paired scene – for this track we will see them one by one. A long through take of the camera on # 1 with the author’s text, then popup and we get into the hub on stage number 2. From the musical theme of the scene there can be a transition to the Friza combat theme.

Yes, more references, but for this topic, I’m sorry I will not post it – I do not want to spread all the music for nothing. You will still, maybe, buy it. Just kidding, for the reference, we have used a track from another game (not ours), on which Adam works and which I really liked. And, of course, several images illustrating the text: 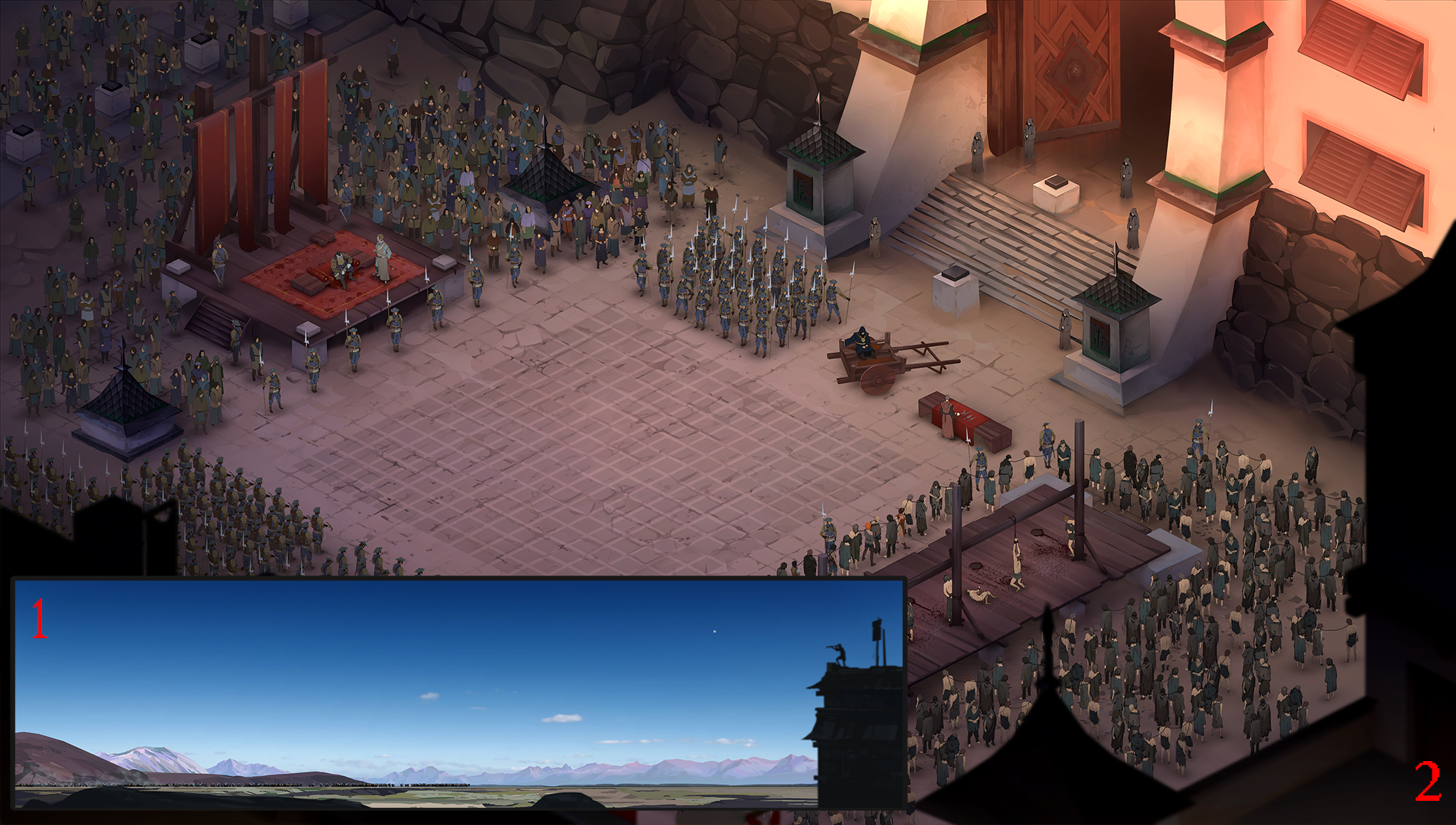 What do you think – does the track fit the atmosphere and picture or did we screw up? And once again: guys – Adam, Krzysztof – men, thank you very much for your patience and your work. Without your music this game would have never become the way it is! Thank you! I will definitely bring you a bottle of vodka in 2018!

Something we have definitely finished

Oh, these infamous second 80% of the project. Polishing and lapping added a lot of work that we did not plan to do (and who really plans to? For sure you can get it on the first try) – 6 cutscenes added for almost 2 minutes of total duration. We drew small clips for non-plot deaths for the minor characters and main characters, made 3 new combat characters, added some text and rewrote a lot.

And we have completely, hallelujah, finished all the fighting characters. This long, spread of 15 months job has finally come to an end. In total there are 53 combat units in the game and here is most of them: 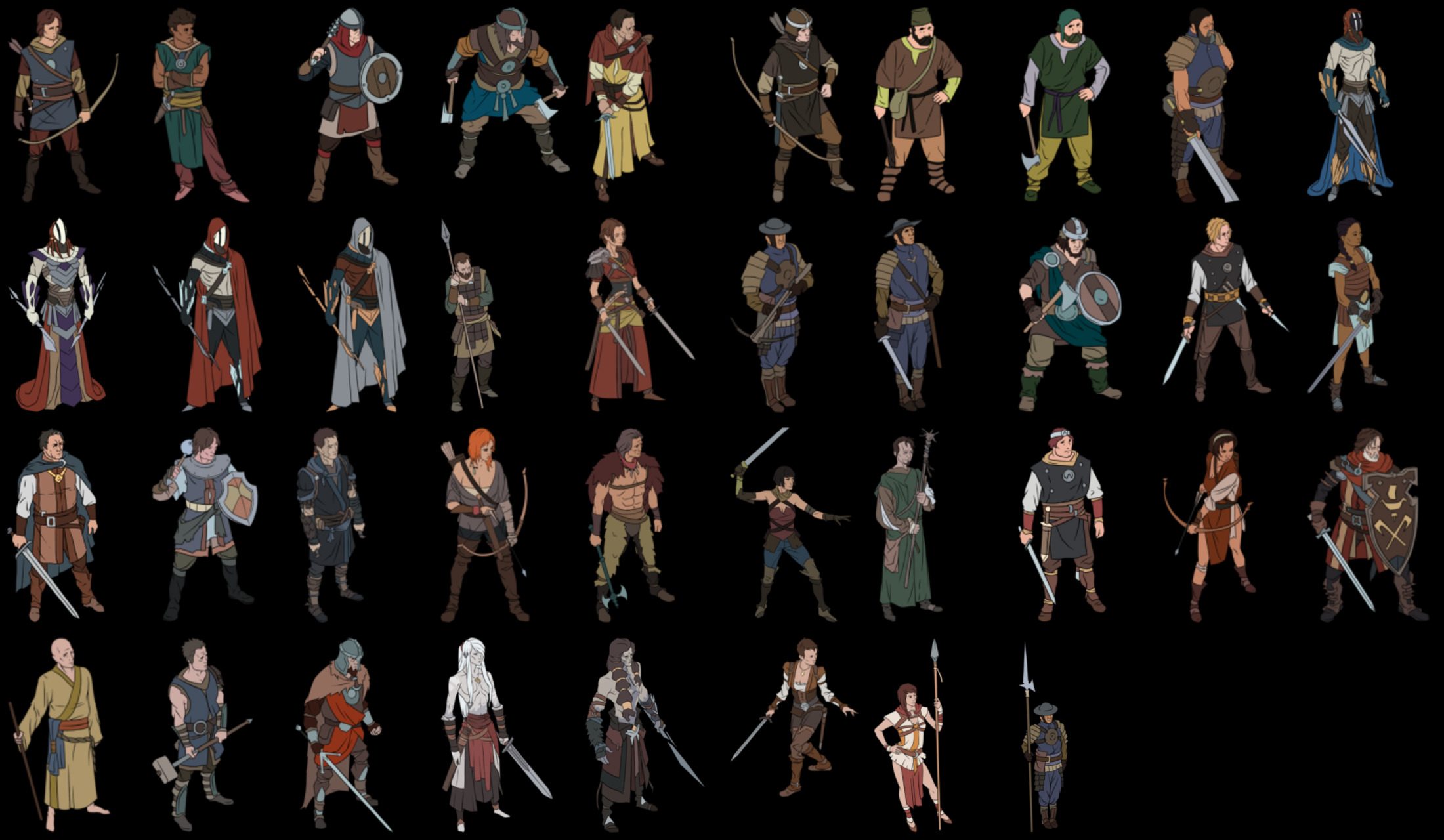 We somewhat struggled to finish this part of the work – our animation contractor (Mirball) showed itself, to put it mildly, not in the best way, and the animation and phase team worked with us directly as a result of it. Misha Filippov, our supervisor of rotoscoping, thank you very much – without you we would not have finished this work.

By the way, if you want to make a cool cartoon or want a lot of hand-drawn animation – write to us, I have really enjoyed working with it and we are happy to animate something for you. Cheap and with a high quality 🙂

The entire rotoscoping team, I’m sorry that I do not list all of you by name – thank you very much, guys. Your confidence, diligence and hard work have allowed you to make a lifelike and cool animation.

In total, the project has 31,751 frames of combat animation, carefully and lovingly drawn and carefully painted in hand.

But the game was hardcore …

So, hold on, put away fires and pitchforks! I did not say yet that we have screwed up everything, we have just given it one over with a file. Okay, seriously – we completely, for 100%, have reworked all the skills of all the fighting classes in game.

The game has 21 combat class. When some reporters use year old screenshots in their articles and write that is just the same as in the game that we do not mention, I’m just cringing. If anything, the combat system is ours is from the beginning to the end. Nothing similar except for the turn-based system.

Moreover, the mechanics were slightly redesigned – there are no more skills that use up a turn without dealing damage. Instead, these skills have cooldown and they can be used without ending a turn. We have also finalized the number of skills per class and their order. 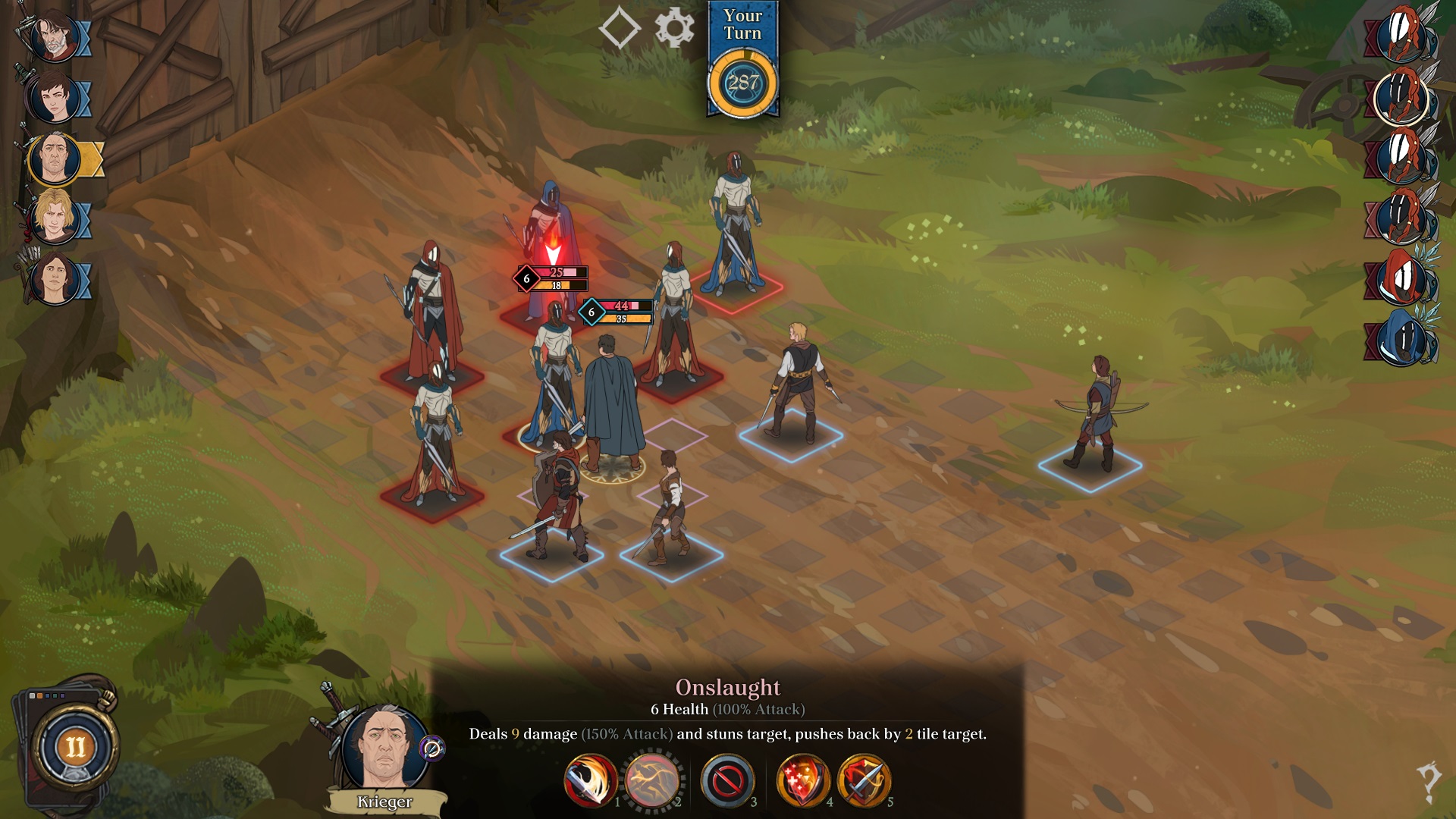 In addition to the new combat UI, the game now has a “story mode” – if you are not interested in fighting, you can choose it. Get stronger characters and more resources, and in the battles the AI will fight for you. At least, it will save you from the deaths associated with injuries in combat.

Combat UI (the one that above), was reworked a total of 9 times. Now almost any action on it can be done in 2-3 clicks.

Here is one of the first versions for comparison: 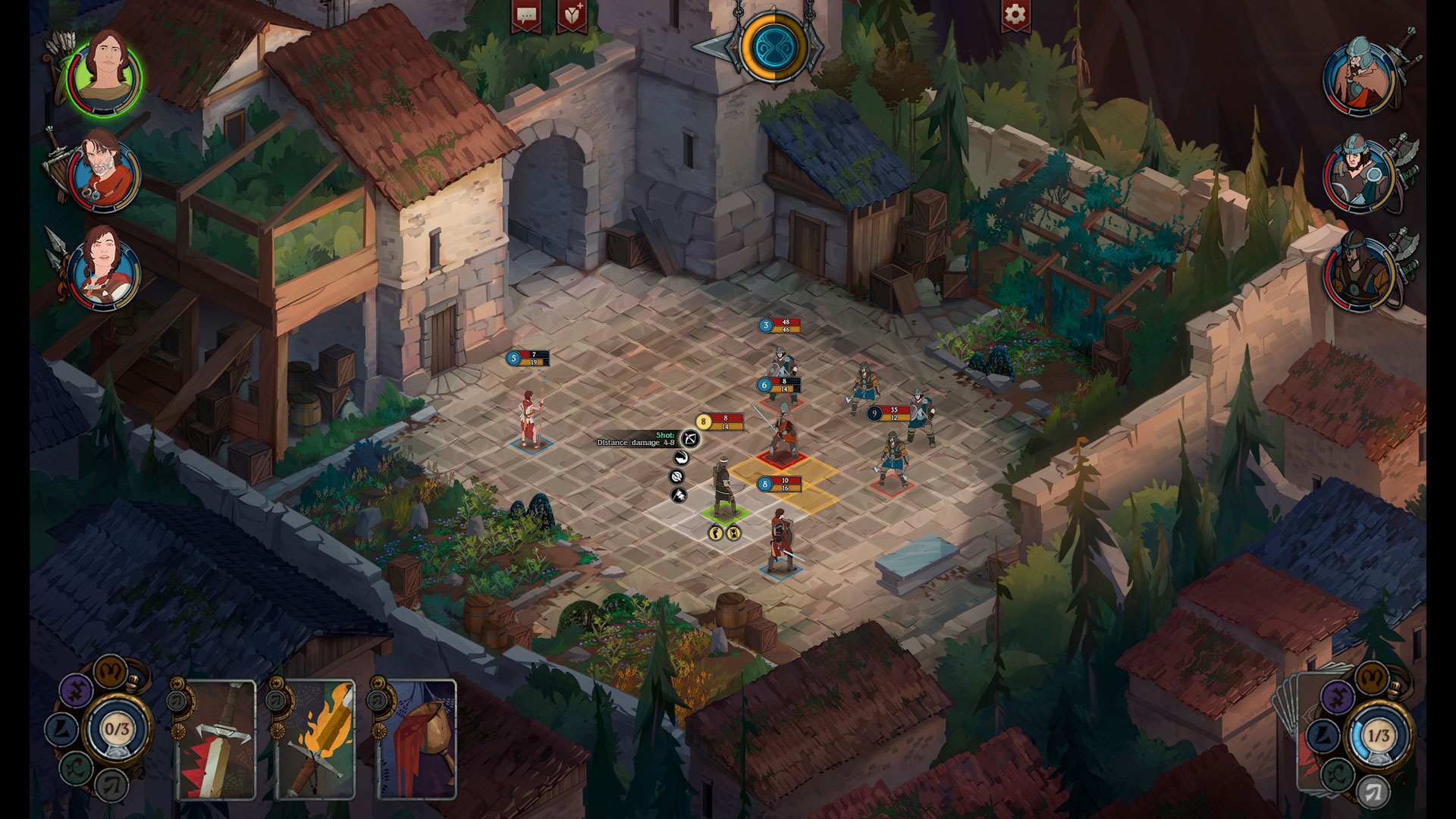 The casual lobby did not only get to the combat system. Under a hailstorm of the public requests we have decided to mark icons on the hubs with a special color to separate the important plot decisions from lore. Fingers crossed, we have added “shortcuts” everywhere so that all the dialogs could be read at a minimum. And, yes, we have marked the icons with important elections that have consequences. Ugh, shame, shame.

The second protagonist, Hopper Roel, always fights alone. And, believe me, it’s not bloody simple, to make over a dozen fights with one character to be fun. I hope we got it!

Do not worry! Everything will be fine: the deaths and their numbers, the choices and consequences – all of this is left as before. We have revised the process of adjusting the global difficulty using Blance’s behavior: give in to the vices and AI can be fierce almost at the beginning of the game, if you want it. Something else we did not have time for, but we will do it – the AI will call in friends for help, and, at a high level of difficulty, finish off those of your characters who are more likely to die after the battle. You will watch more 25 deaths:

Yes, yes, montage, rearrangement. We ran out of funds for frame by frame animation!

We also drew all the scenes. Lo Pheng’s storyline will add to the game 9 episodes, 12 new battlefields and a…

train. At least one and we will ride on it. In total, Lo Pheng’s storyline has added 39 scenes to the game and two dozen backgrounds for adventures on the road. In its history, we tell a lot about the past of the world, about the conflict between Frisa and Berkana. 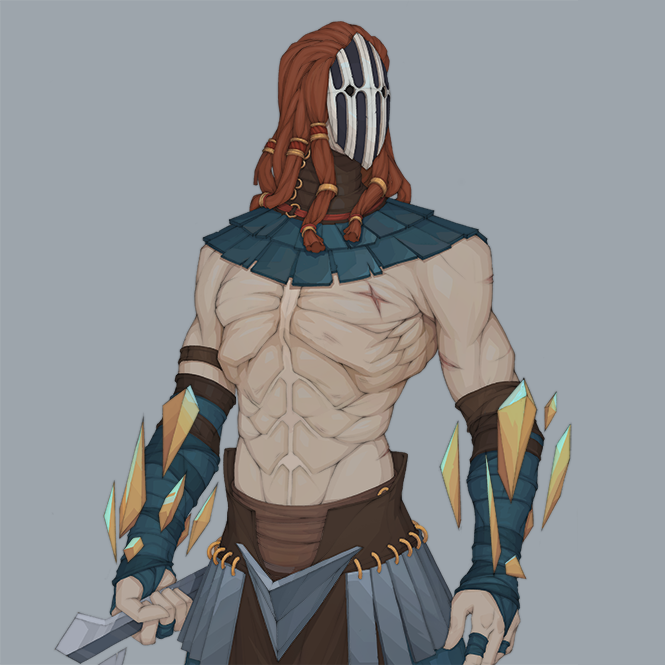 Kshama, that is the name of the ens pictured above, can join Lo Pheng’s party and tell him a lot about his native world and its nature.

This year, one observant Scotsman sent us a picture from a homebrew tabletop where our characters were used. That is cool – take them, do it, share it with us! It’s very cool that you give our heroes a new life!

Yes, Kshama is the last of the 54 characters we drew for the game. 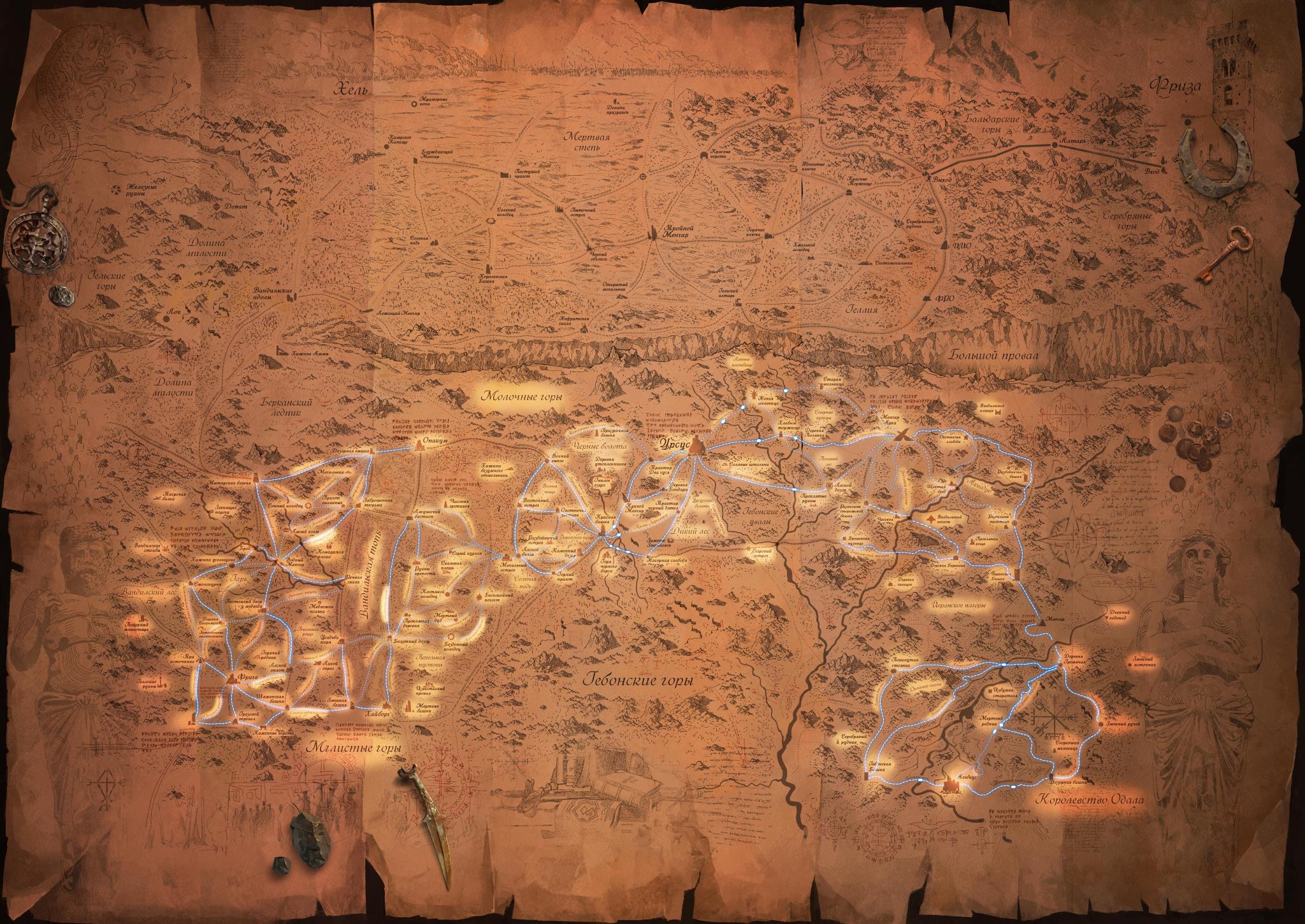 And this is a map with highlighted paths for Thorn’s team. And in each node or on the way to it something can happen to you. At the top of the map are new locations and the path which Lo Pheng’s team will take. I believe that you will enjoy exploring and studying it, and the most attentive ones will be able to find a few textual puzzles with Easter eggs from us.

We have completely reworked combat UI, effects, blood, pop-ups, menus, settings. I have a feeling that from our past diary we managed to change the whole UI 2-3 times. An endless series of tests, feedback and reworks to make the game a little better and clearer. 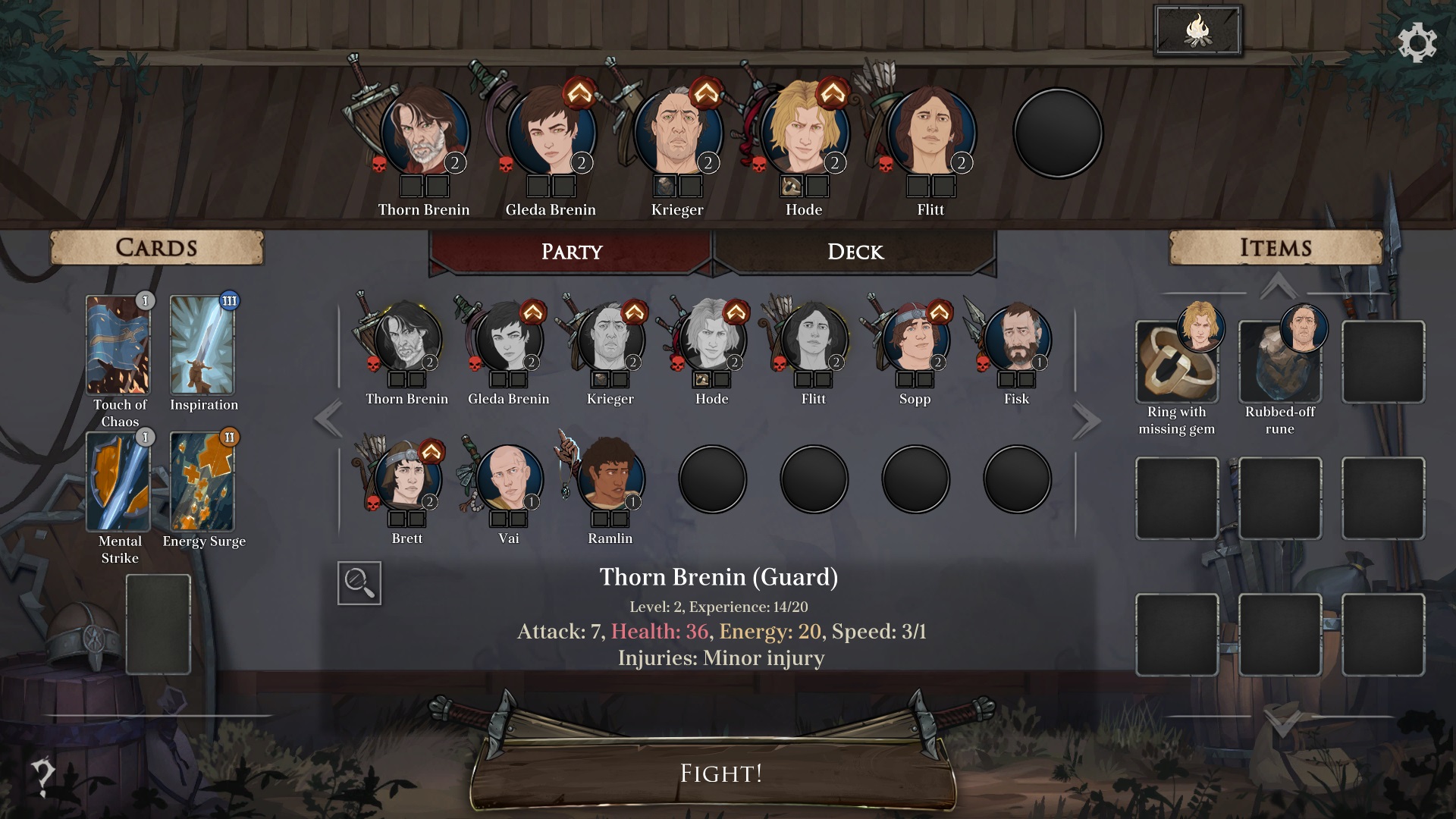 Instead of a conclusion

In January, we began to collect all the finished art for Lo Pheng’s storyline in the game’s engine. I’m sorry to admit it, but from February we will work on the weekends as well.

Yes, as a manager, I’ve screwed up with overtime – boldly throw stones at me if you were not in my place.

Otherwise, we will not have time to test and polish everything. In March the game will be released in Russian, Ukrainian, English, German (thanks to Marcel Weyers), Italian (thanks to Giorgio Longo and the team) and Chinese. We are also translating to Polish (thanks to Michal Mroz) and to Brazilian Portuguese, but we will finish most likely in May.

Perhaps, we will also translate the game into Spanish and French, but everything is still vague. Chinese is actually almost ready – I just can’t get around to uploading it to Lokalise.

Regarding multiplayer — we have a working PVP mode. You can log in, chose the team comb and rush into battle. Now we are working on the lobby, the receiving of experience points, chests (upgrades are tied to boosters), ratings. I really want to be in time for the release. And yes, we will not have lootboxes.